Over 1,000 Heat Records Broken in Northeast

UPDATE Thursday 4/8/10: With yesterday's records added in, the totals are 857 Record Highs Broken with 401 Record High Minimums, for a total of 1,258 records broken. What caused this? Basically a blocking pattern setup and kept warm air moving in our direction for about a week. Today's front will "unclog" the system.

We now have (up to yesterday) 671 record highsbroken this month (plus another 293 record high minimums, for a total near 1,000). 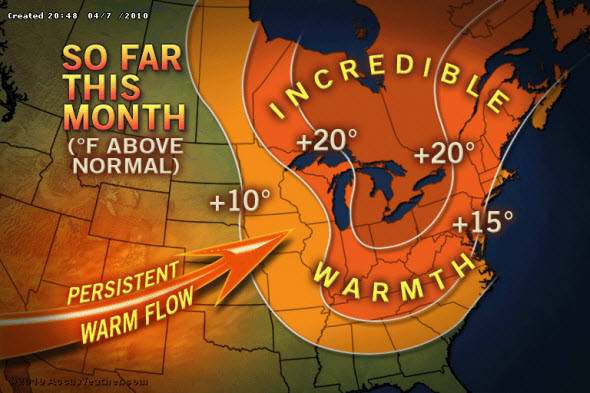 The temperatures are really extreme, in many cases exceeding what you'd normally see at the peak of the summer. Grandfather Mountain, NC hit 80 yesterday (update, they hit it again today) - their warmest ever in April and only 3 degrees away from their all-time record high (for any month)! High temperatures yesterday and today are in the 90s as far north as Pennsylvania and New York City; at Central Park they broke their daily record set in 1929. Below is a temperature map from this time yesterday afternoon; today the mid-Atlantic are far above those anywhere else in the U.S.. 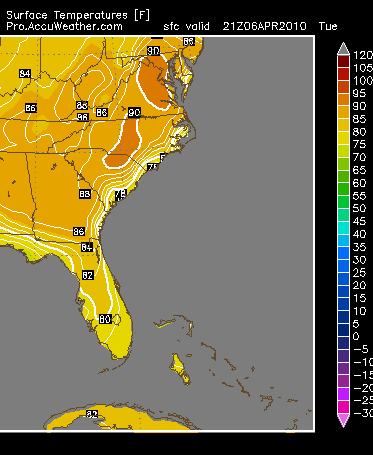 Mid 90s have been seen by official stations; 95 was recorded at Leesburg and Louisa in Virginia, and it rose to 94 at Hagerstown, Maryland this afternoon - just over the Pennsylvania border! As they say about the Desert Southwest, "it's a dry heat" though - relative humidities are as low as 9% at Petersburg, Virginia.

Changes in the position of the jet stream between Iceland and northern Europe will only be subtle over the next few days, but will still cause variations in where the ash plume from a volcano erupting in Iceland will spread over Europe.

Millions of airline passengers will continue facing flight delays and cancellations as a result.

It's the jet stream, which is an area of relatively strong winds concentrated within a narrow stream in the atmosphere extending from 10,000 to 40,000 feet above the ground, that is controlling where the ash is spreading.

"It's like a spray can of ash coming from Iceland," AccuWeather.com Senior Meteorologist Margusity said. "The ash comes out of the volcano nozzle and spreads out into the atmosphere just like a spray can works." 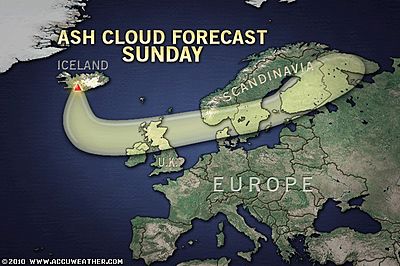 As with a spray can, the plume of ash is not uniform. It becomes deformed and spreads out in different directions the farther away from the source it gets.

While no current satellite imagery was available Saturday morning, imagery from Friday showed the main plume of ash still spanning from Iceland over the northern portion of the U.K. and into southern Scandinavia.

As the plume started getting deformed, an ash cloud has also spread and formed over the northern Europe mainland, as seen on satellite imagery from Friday.

The jet stream is expected to maintain a general position that spans from Iceland over the northern U.K. and southern Scandinavia through Sunday and shift only slightly northward Monday. The main, concentrated ash plume is expected to be collocated for the most part.

Meanwhile, a separate ash cloud that has spread from the main plume and formed over the northern mainland of Europe is located south of the jet stream in an area of weak wind flow. Due to this lack of strong winds, AccuWeather.com meteorologists expect little movement or dissipation of this cloud through Monday. 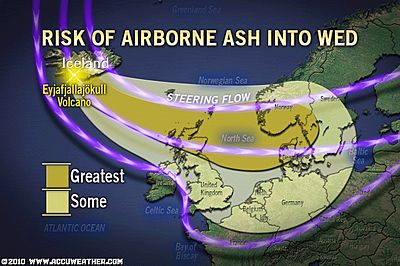 The jet stream, or steering flow, is depicted by the purple lines and will maintain this general position with slight variations through Wednesday of next week.

Tuesday into Wednesday, the jet stream is expected to shift farther south, becoming oriented from Iceland into the northern U.K. and northern Germany. Correspondingly, the main ash plume is expected to follow this trajectory and have the greatest impact on air travel in these areas. This of course is assuming the volcano continues to erupt through then.

The shift of the jet stream farther south Tuesday into Wednesday could be good news for the rest of the northern mainland of Europe. The southward shift is expected to increase winds over the region, perhaps helping to stir up and clean out the ash cloud currently in place.

According to AccuWeather.com Meteorologist Rob Miller, a big change in the jet stream pattern will occur Thursday as a storm develops in the central Atlantic Ocean.

As this storm develops, the jet stream is expected to shift south of Iceland and become oriented out of the west-southwest rather than the northwest.

A southwest jet stream should help clean any remaining ash plume out of most of Europe and bring some relief for the aviation crisis, according to AccuWeather.com meteorologists. 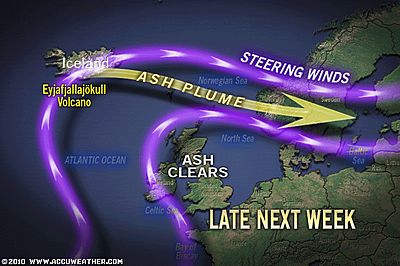 Thousands of flights have been cancelled on a daily basis across Europe since Thursday. According to BBC News, nearly all of Europe's major airports remained closed Saturday.

The U.K.'s Civil Aviation Authority has extended its restriction of most non-emergency flights in U.K.-controlled airspace until at least 7 a.m. local time on Sunday.

Officials in Poland are worried that air travel will remain suspended for Sunday's state funeral of President Lech Kaczynski and his wife Maria. Leaders from around the world are expecting to fly into the southern city of Krakow for the ceremony.

Aviation authorities in Scandinavia and most of northern Europe have also restricted air travel.

The grounding of flights in reaction to this threat is creating nightmares for airline passengers across Europe and around the world.

Rather than impairing visibility, the real threat with this volcano is ash possibly affecting airplane engines and control systems.